Alexander Auldjo was the first man to be granted Lot 30 by the British Crown, for his military service in Butler’s Rangers. Although I couldn’t determine his military rank, he would have been a senior ranking military man because he was granted two parcels of land. The date was June 1801, when the Crown granted Alexander Auldjo his 100 acres in the Township of Niagara, as well as a 1/2 acre known as Lot 1, within the Old Town. Like many other land grants at the time, Lot 30 was originally a long, narrow strip beginning from the Niagara River to the east and continuing west along the road allowance (now known as Line 3 Road) to terminate at what is now known as Concession 2 Road (which has also been referred to as Pancake Road and later as Progressive Avenue). On May 3,1803 Alex sold his 100 acres to John Ulman. Five years later, John was wealthy enough to grant a mortgage to Robert Hamilton for 66 pounds sterling. Unfortunately, Robert Hamilton died two years later.

The Very First Farmer on Lot 30:

John Ulman can be credited as the man who cleared and planted the first crop on Lot 30. It is known that he planted apple orchards. John married and prospered on his land. Upon his death in 1828, John Ulman’s last will and testament stipulated that Lot 30 should be divided equally into three equal parts running east to west, and given over to his three sons: Peter, Benjamin, and Barnett. Barnett Ulman owned the slice of land where the winery is located on today.

The Effects of War & Disease:

Back in the day, you would have been given 3 years to build a house on your granted lands, and if you didn’t, the local Sheriff (Lt. Colonel William Kingsville, incorporated militia of Canada (formerly captain in H.M. 66th Regiment of Foot; married to Hannah Pinnock) would take the land back for the Crown and he would sell the land to another. The Sheriff would also take your land back in the name of the Crown if you didn’t pay your taxes or died leaving no known relatives, (eg. from diseases such as Consumption, or from fighting in the Fenian Raids, or the War of 1812). In 1848 Sheriff Kingsville took back two parts of land making up Lot 30 and sold them to John H. Ball (in 1852), and Richard Miller (in 1853), leaving one Ulman brother with land. The family’s house faced Concession 2 Road as depicted in a map of 1862 and described in a land transaction sale, even outhouses were included in the list of buildings in historical land transfer records. Benjamin Ulman is listed as Trust Claim recipient for a part of Lot 30, received from Richard Miller in 1865. If I’m not mistaken, this means that after the death of John Ulman, part of the land was held in trust until his son Benjamin was old enough.

The Iron Horse Comes to Town:

Land records elude to many years of work obtaining land for the construction of a railroad into Niagara-on-the-Lake. Today this tract of land is used as a recreational trail. In 1859, James Currie sold his half of his land holdings on Lot 30 to his brother Alexander, who then sold the whole southerly third of Lot 30 to his son William. William A.F. Currie started his career as a yeoman and later his job is listed as registry clerk, (working for his uncle James, no doubt). 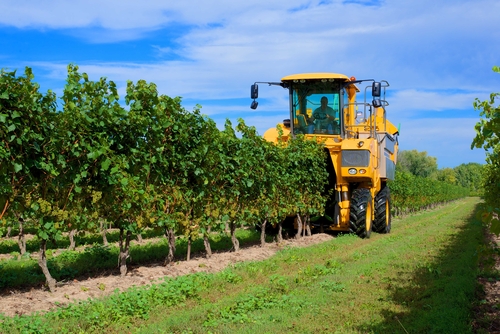 The most northerly strip of Lot 30, owned by John Ball, was sold in 1865 to James G. Currie, thirteen years after he had purchased it. This is the land portion on which Lot 30 Winery is located.

James George Currie (a Lieutenant-Colonel), was born in 1827 in York Upper Canada (Toronto). He was 26 years old when he was called to the bar of Upper Canada. He moved to St. Catharines to practice law and served as the Deputy-Reeve for St. Catharines. Mr. Currie also served as warden of Lincoln County and Mayor of St. Catharines from 1859 to 1862, as well as representing Niagara District in the Upper House before Confederation (1862 to 1865). At the age of 39, James Currie played a significant military role in repulsing the Fenian raid of 1866. Later, in his mid-forties, he held the position of speaker of the Legislature from 1871 to 1873. He was named registrar of Lincoln County in 1881 at age 54.
James married late, at the age of 38 years, to Emma Augusta Currie in 1865.  Emma was 36 years of age when she married, and had been born right here in Niagara-on-the-Lake.  She died in 1913 at the age of 84.  Emma was a power to contend with in her own right, being appointed Deputy Registrar and holding the position for many years.  She was a supporter of the W.C.T.U. (Women’s Christian Temperance Union*), and an advocate of women’s suffrage. She was one of the founders of the Protestant Orphan’s Home of St. Catharines, and wrote a biography (at the age of 71) of Laura Secord that was first published in 1900. The book was published a second time in 1913 after Emma passed away. James and Emma Currie had only one child, a daughter named Jessie Flora Currie who died in 1932.

In 1865, James G. Currie sold his northerly Part of Lots 30 & 17 to John & Anne Clyde, a local farmer and his wife, for the price of $4,000. In the same month and year, John Ball sold his southerly Part of Lot 30 to James G. Currie for 100 pounds sterling. From that year forward, it was John Clyde who farmed the land that the winery sits on along Line 3 Road.
As you can tell, in the mid-1800s in Niagara-on-the-Lake, both the British pound and the Upper Canadian dollar were used simultaneously. Must have been a bit confusing, then again, maybe not, being a border town, we deal with exchange rates all the time. In 1873 after eight years, John Clyde sold his farmland along Line 3 Road to Henry Skelton for $3,250. Henry and Maria Skelton lived and farmed for 38 years on Part of Lot 30, until April 1911, when the 70 acres of farmland was sold to James Ford. There were many severances and owners on Lot 30 in general after that, but I will spare you from the multitude of dates and names and transactions.

Art & I have farmed here for over 30 years. We’d like to beat Henry & Maria’s record for farming the longest on this land! There were many farmers that came and went on Lot 30, some unknowns and some that we know a little bit about. For example, a druggist named John Henry Wilson from Brooklyn New York settled here when he married Adelia Currie. I wonder if he worked at the apothecary that still stands at the corner of King and Queen Streets in old Town Niagara-on-the-Lake? My historical search answered many questions about this land and its beginnings, but it also left me with still more unanswered. If you hadn’t already figured it out, Sue absolutely loves history and sleuthing about it.

A special thank you to Pat & Len for providing this information!

We are pleased to share Art's passion for winemaking with you! For more information, visit us or give us a call!

Located in the gorgeous green fields of Niagara-on-the-Lake, we specialize in creating first-rate wine at affordable prices. Our beautiful vineyard specializes in organic wine and sustainable practices. We produce many varieties of wine. Visit us today!

We are participating in many farmer’s markets around the area, click here to see when and where!
View Markets

(Other times available by appointment only)